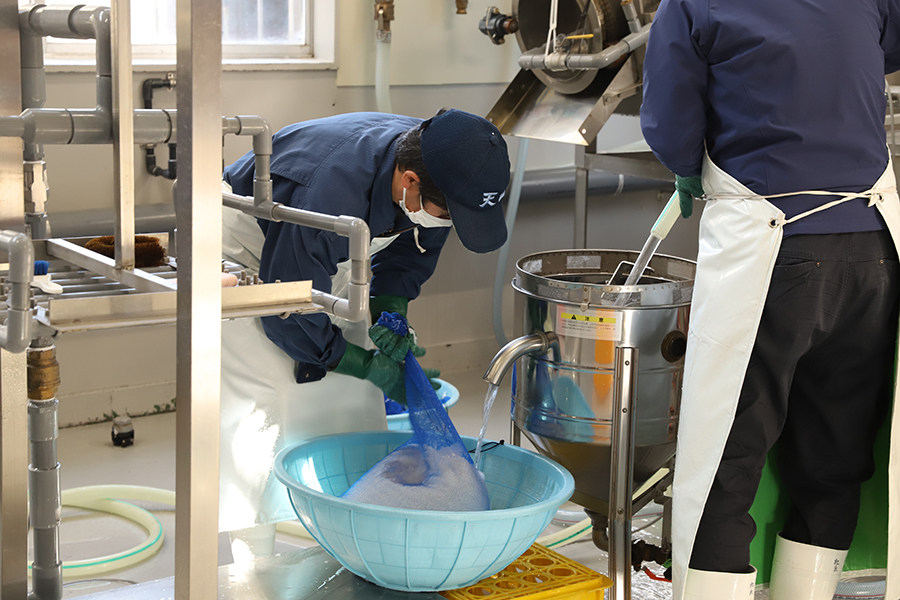 The purpose of processing ingredients is to enable the rice to be steamed in the most effective way for fermentation. The basis of brewing sake is ‘1- koji, 2- moto (sake mash), 3- moromi fermentation’, but if the process goes differently from our expectations, it will be difficult to adjust the process later on. It can be said therefore that sake brewing depends on the processing of ingredients.
First of all, we wash the rice and get rid of nuka (rice bran). As with washing rice at home, if you ignore this process, you cannot make good quality sake. Our company uses MJP (a machine for washing rice by mixing water and air together). After that is Shinseki (to let the rice absorb the required amount of water). Highly polished rice in particular absorbs very quickly and we need to adjust the timing down to the nearest seconds. This is called gentei kyusui (limited water absorption). And then the rice is steamed with a koshiki (rice steamer). The steamed rice is cooled to the right temperature for koji, moto (sake mash) and moromi using a horeiki (rice cooler). This is the main work involved in processing ingredients.

Processing ingredients is the first step for sake brewing. If this process goes wrong, it will affect the subsequent stages. I am working responsibly with pride. Every day, we try hard to brew ever more excellent sake and let everyone enjoy nihonshu. Thank you very much. 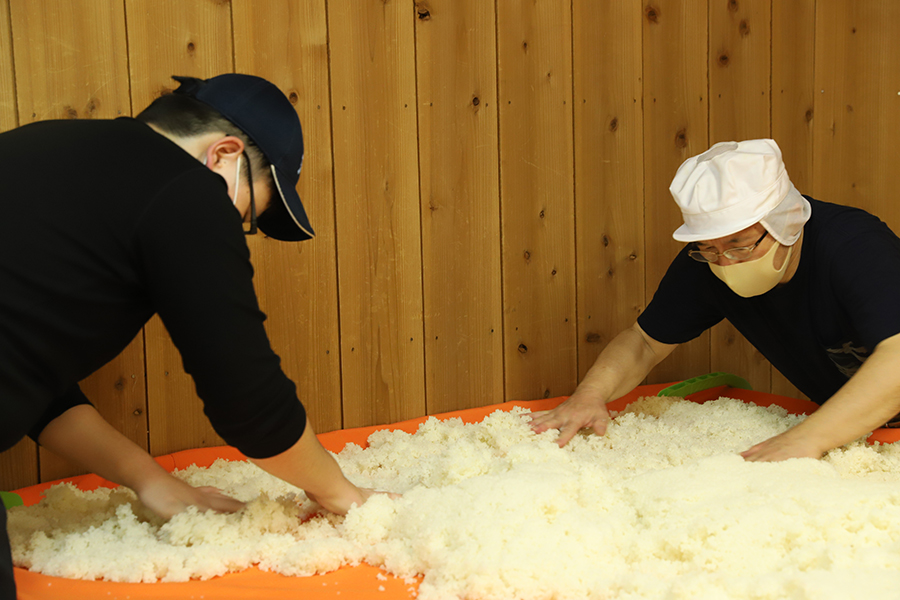 The koji is aspergillus, a type of mould, propagated with grains such as rice, barley or soy beans. Koji is necessary to brew sake. After cooling the steamed rice to the most suitable temperature, it is moved to the koji room and sprinkled with tane koji mould (aspergillus). The rice is covered with a cloth and the koji mould propagates over 24 hours in order to germinate. When it germinates, the hardened rice is broken up and transferred to moridana (layered shelves). The temperature must be monitored and adjusted 3 times and koji is propagated in the steamed rice for another 24 hours. It takes 2 days to make koji. The role of koji is to create enzymes which convert the starch into sugar.

I am in charge of koji making. I try to grasp the koji mould development daily through temperature, appearance and other information which I cannot see but only feel Koji is crucial and has various roles in sake brewing. We “raise” koji with tender care hoping it can go to the next step properly. 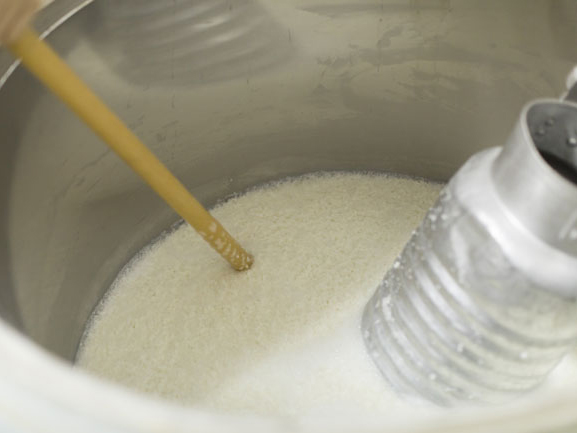 Shubo is written with the Japanese characters for “sake mother”, it used to be called moto, (implying “origin” or “”base”). It used to be said that ‘1- koji, 2- moto (sake mash), 3- moromi fermentation’, and cultivating good quality sake yeast is a crucial process. The sake yeast has a vital role in producing alcohol, breaking down the sugar converted by the koji mould. Sake’s fruity aroma and refreshing flavour are also created by the sake yeast. As sake yeast has strong acidic characteristics, shubo itself is high in acidity and this makes wild yeast or bacillus difficult to germinate. Hence after saccharification by adding koji and steamed rice, we add sake yeast.
The four methods of brewing we are using are chuon sokujo (medium temperature fast brewing), kouon touka (high temperature saccharification), yamahai (sake brewing using natural yeast and no mashing) and kimoto (traditional sake yeast mash starter). Especially chuon sokujo, which is 80-90% of all production. These four methods can be divided into two groups of sokujokei-shubo (chuon sokujo and kouon touka) and kimotokei-shubo (yamahai and kimoto). Sokujokei-shubo is a method in which lactic acid is added to raise the acidity, and kimotokei-shubo is a method in which the acidity is raised with natural lactic acid bacterium. The former method definitely raises the acidity and lowers the development of wild yeast. With the latter method, we try to create an environment to produce lactic acid bacterium smoothly and the lactic acid generated naturally, means that the probability of wild yeast development is reduced, and a fine yeast yield should be increased .
Making full use of these two groups with the four methods, we produce large quantities of fine yeast and pass the baton on to the next stage of the process.

I’m Sakamoto, in charge of shubo.
Checking the scent and the change of state for preparation of each bottle from day to day, I feel keenly how difficult it is to change the environment with the temperature and some other variables, and I prepare it carefully to deliver superb sake to you. I would be happy if you could enjoy our company’s sake, bringing you a smile! 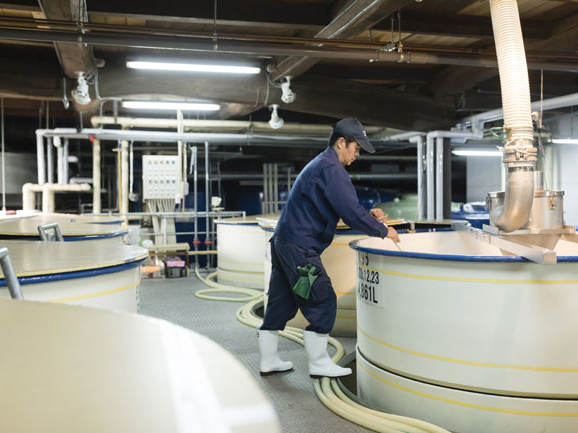 Mizu-koji
Shubo, soe, naka, tome (three stage mashing). For each shikomi (preparation), the order of adding the ingredients to the tank is water, koji, kakemai (rice used to produce moromi). This process is carried out in order to extract the koji enzyme from the water and let kakemai absorb it later. Mizu-koji means that koji is added to the shikomi water. The koji mould has completed its role at this stage and the enzyme produced from the koji mould keeps working until the end of the moromi process.
Soe-jikomi (first addition)
A smaller tank is used for soe-jikomi separate from the naka and tome tank. This is because if a big tank is used for a small amount of ingredients, the upper space of the tank cools down the moromi temperature.
Odori (rest day, lit. “dance”)
The day after soe-jikomi, the preparation process is stopped. This gives time for the yeast to propagate adequately.
Naka-jikomi (lit. middle addition) and time-jikomi (lit. final addition)
The day after odori, naka jikomi is done, and a day after naka jikomi, tome jikomi is done. The shikomi temperature is gradually lowered. As with soe, the lower the rice polishing ratio (i.e. the higher degree of rice polishing) is, the lower the temperature gets.

For each shikomi, we determine the sake quality needed for each product and take samples in order to analyse alcohol content, sugar content and amino acid level, as well as to numerically calculate the progress of fermentation. It is also important to grasp the sensual changes of moromi such as aroma and appearance. We are going to take on the challenge of modern sake brewing, while preserving the traditions and will keep working to make people happy with Tenzan’s sake. 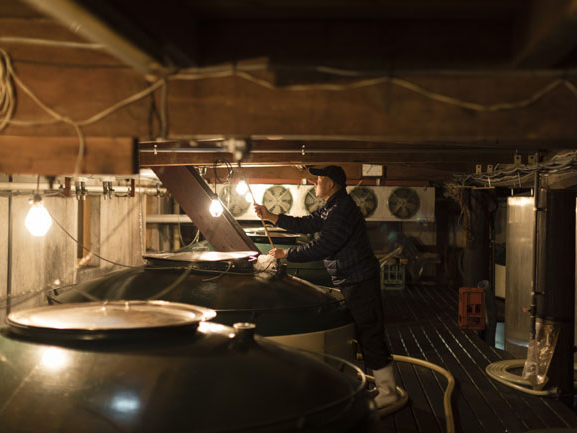 Joso is the final sake brewing process separating moromi into sake and kasu. There are various methods of doing this, and we use two different approaches; Yabuta automatic compressor and fukurozuri (bag squeezing) at Tenzan Sake Brewery. The pressed sake is moved to a tank for storage at low temperature and avoiding contact with air as much as possible. After that, in a short period of time, it is bottled and ready for sale.

After one month of various brewing stages, the matured moromi becomes a mass of simmering clear drops, and changes to sake after joso. As someone in charge of joso, I get very excited and feel really delighted that I am involved in the sake brewing at this point. 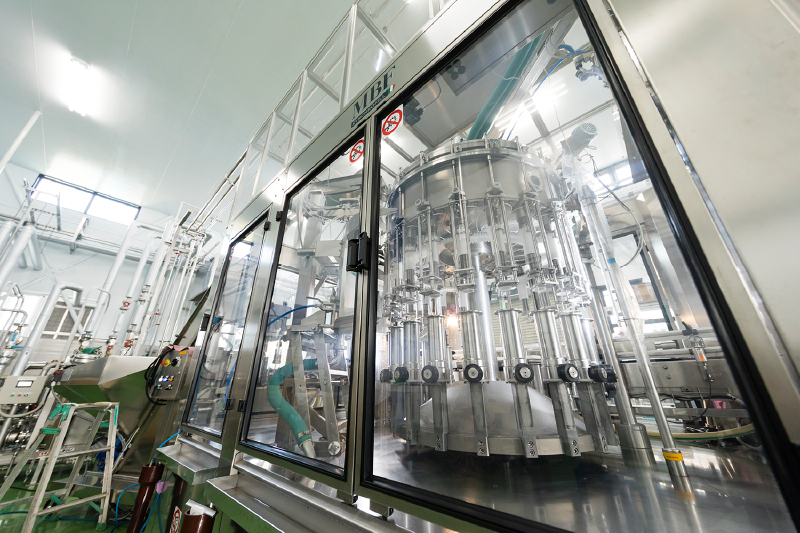 For further quality improvement, the most-up-to-date filling line system has been running since November 2015. With the Italian monoblock filling machine with nitrogen infusion, it became possible to avoid oxidation when filling and capping the bottles. 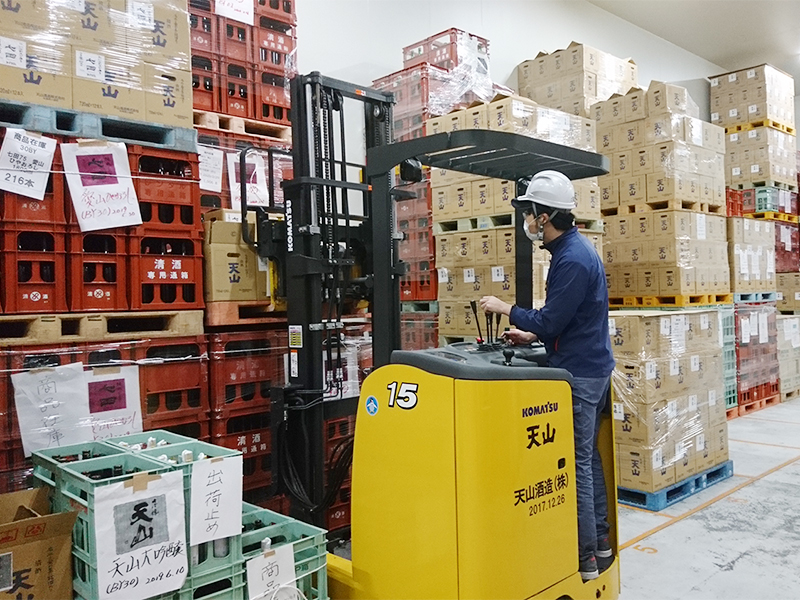 This is a facility for both refrigerating (5℃) and freezing (-7℃), and 100,000 of 1.8 litre bottles can be stored. Because of this, product management has been improved, and we can ship our products with an even better quality.

In Japan, drinking alcohol is permitted for adults over the age of 20. Enjoy alcohol in moderation. Never drink and drive! Pregnant women and mothers of small infants should be aware that drinking alcohol could affect the development of babies.